Now Dig This Magazine & Elvis – The Man & His Music

No products in the basket.

About Now Dig This

Now Dig This has been published monthly since April 1983. Elvis – The Man & His Music has been published quarterly since December 1988.
Both magazines are independently produced and printed in the North East of England. The editor of both publications is Trevor Cajiao.
Here, he answers some frequently asked questions about both magazines and also sheds a little light on their history and background.
​

WHY DID YOU START NDT? 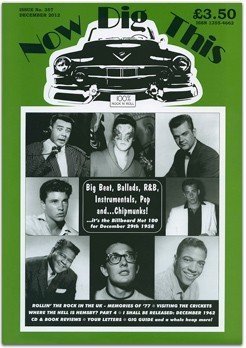 Basically, because I wanted to. I’d always enjoyed some of the many rock ‘n’ roll magazines that I grew up reading in the 1970s, but they never seemed to come out as regularly as I—a fan—wanted them to. My idea was to produce something every month, so that’s what we did. There was no ‘market research’ or anything like that done; we just produced the first issue and set about selling it at local gigs, all-dayers and anywhere else we could. Thankfully, the earliest issues sold well enough through those kind of outlets that we were eventually able to offer subscriptions (by issue No.4) and also pick up distribution through specialist dealers around the UK (at first) and then abroad. It was a hard slog, but always enjoyable simply because we loved the music so much.

WHAT WAS THE AIM OF THE MAGAZINE?​

The same as it is today – to inform and entertain. Hopefully we do both. Promoting rock ‘n’ roll and producing a regular magazine for rock ‘n’ roll fans was always the main idea. In order to do that and maintain regularity we realized within the first two years or so that it had to be run as a business. The first 11 issues were done on a typewriter at home – real ‘fanzine’ style – before we had to invest in more satisfactory equipment. After that it was a slow progression through all sorts of areas we’d never thought about – dealing with the tax man (deep joy!), getting an accountant (with a sense of humour – naturally), renting office space and eventually buying that very same property. Not that NDT is some kind of global, mega concern that’s about to be floated on the stock exchange. Far from it. We’re still small potatoes in lots of ways, but we hold our own. Getting involved in such matters was the only way to ensure publication would continue. That, and staying independent.

HOW DID YOU GO ABOUT GETTING CONTRIBUTORS?

At first we approached many of the people we knew through the rock ‘n’ roll scene in the North East. After that we gradually built up contacts all over the country and then all over the world. It actually all fell into place pretty quickly and a lot of the early contributors are still writing for NDT today. (You’ll have noticed I’m using the term “us” and “we” here. Perhaps I should explain that when NDT first started it was a partnership deal between myself and Mickie Downey, a fellow life-long rock ‘n’ roll fan. Our fathers both loaned us the loot to get the mag started. Mickie, who went on to play bass with rockabilly trio The Skiprats, and still does today, gradually drifted out of the picture but we remain best buddies).

WHAT IS THE AVERAGE AGE OF THE READERSHIP?

Going by the mail we receive it’s a wide age group. There are those who were around in the ’50s and experienced the music first-hand; many who picked it up via the various ‘revivals’ in the late ’60s / late ’70s / early ’80s, and some younger ones who are just discovering the music now. Even after twenty years, we still get long-time rock ‘n’ roll fans contacting us who’ve only just heard about NDT.


WHERE DO MOST OF YOUR SUBSCRIBERS LIVE?

All over the world, really. Most of our sales remain in the UK, naturally, with Europe close behind. Elsewhere we have subscribers all over the place – from the States and Australia to Israel, Japan and all points in between. But we can always do with new readers – so spread the word!

HOW DO YOU DECIDE WHAT’S INCLUDED IN THE MAG?

There are no guidelines written in stone, so to speak. Right from the start it was decided to include all the styles of music that go to make up the Big Beat. Whereas most of the mags that had gone before had concentrated only on particular areas, we wanted to include it all, from rockabilly and doo-wop to country, r&b and everything else. That’s where the ‘100% rock ‘n’ roll’ tag on the cover came from. Whether it’s Carl Perkins, The Clovers, Piano Red, Link Wray, Conway Twitty, The Moonglows, Clyde McPhatter, Jett Powers, Big Joe Turner, Eddie Cochran, The Harptones, Bill Haley & The Comets, Sonny Burgess, Screamin’ Jay Hawkins, Jerry Lee Lewis, The Champs, Roy Brown, Aubrey Cagle, The Chantels or Joe Bennett & The Sparkletones – it’s all rock ‘n’ roll. Dig?

DID YOU EVER THINK THAT NDT WOULD LAST AS LONG AS IT HAS?

I never really thought about it. The idea to start NDT in the first place just came along and we ran with it. There was never any great long-term plan as to how it would grow and develop – it just happened. Back in 1983 I don’t think it crossed anyone’s mind (certainly not mine) whether it would last five years, ten years or whatever. We just got on with it. Financially there were some hairy moments in the early days, but once we became established and readers realized it wasn’t going to fold like so many magazines of its kind had done before, then we were really able to put down some roots and take it from there.

WHY DID YOU THEN DECIDE TO START A SECOND MAGAZINE DEDICATED SOLELY TO THE KING, ‘ELVIS – THE MAN & HIS MUSIC’?

That happened purely because I felt there wasn’t a regular magazine out there that did him justice. As a life-long Elvis fan I was disappointed with the Elvis mags that were on the market. None of them were offering the kind of information I, as a fan, wanted to read. There wasn’t enough emphasis on the music. So we launched EMM in December 1988 and immediately learned that there were like-minded fans out there who wanted just that kind of magazine. They were just as fed up as I was with badly written, poorly researched, make believe, factually incorrect Elvis magazines. Right from the start we advertised no poetry, no fiction, no impersonators – just the facts! And that’s what we’ve always been about.

‘ELVIS – THE MAN & HIS MUSIC’ IS RENOWNED FOR ITS IN-DEPTH INTERVIEWS. WHO ARE SOME OF THE PEOPLE THAT THE MAG HAS INTERVIEWED?

WHERE DO YOU FIND ENOUGH MATERIAL TO FILL EACH ISSUE?

That’s probably the most frequently asked question of them all. In reality it never seems to be a problem and – nine times out of ten – something invariably gets left out each issue and bumped over to the next one. The term ’embarrassment of riches’ is a common phrase at NDT HQ, and long may it continue to be so. Our regular team of dedicated contributors – all of whom do it for the love of the music – never cease to amaze me and there’s always plenty to include in every issue.